16 Reasons to Study English in Ireland

With Britain exiting the European union, there is an element of uncertainty surrounding the relationship it will have with the EU block. A large percentage of countries will look to Ireland as the logical solution for English language learning, especially, if visa issues make the process difficult for groups of junior students over the summer months.

Interestingly, Ireland actually has a higher percentage of English speakers than Britain. Ireland boasts that 97.51% of the population speak English while the UK is slightly lower at 94.45%. The irony of that statistic will not be lost on our Irish readers. Ireland is also known for having a higher percentage of standard English being spoken, making it a great choice for English language immersion programmes.

Malta is another firm favourite for EFL students and for good reason as it comes in at # 3 on the list of English language speakers with 62.39% of the population speaking English. Cyprus is another popular destination but only comes in at number 7, behind Sweden, Denmark and Finland with 43% of the population speaking English. More details can be found here. Malta and Cyprus, of course, have the added advantage of a warm climate which is a bit of an Achilles Heel for the Emerald Isle.

The ability to work while studying English is increasingly important. Students are faced with higher tuition fees and living expenses than ever before. Studying in Ireland allows students from non EEA regions to work up to 20 hours per week during term time and 40 hours during the holidays. The minimum wage in Ireland is now €9.25 per hour which is at least €740 per month extra income. The UK introduced working restrictions for English language students in 2015 which makes Ireland a preferred destination to study English in Europe. More Information about working in Ireland can be found here.

a In many schools, the teachers hold a masters degree in English. You will be speaking confidently in no time if you come to Ireland to learn English. Teachers of English in Ireland are highly respected and have a reputation for teaching English to the highest of standards. In many parts of the world, schools will accept an English teacher with very little experience and sometimes without holding any recognised qualification. This is not the case in Ireland as language schools are required to employ English teachers with a minimum of a degree qualification (Level 7 Minimum) plus CELT/CELTA (Certificate in English Language Teaching) qualification.

It turns out that the Irish have another accolade to help boost their ego. The Irish accent was voted the sexiest in the world. Fending off stiff competition from the French and the Scottish, the Irish top the list. If you can't understand what your lecturer is saying, you can still enjoy the soft musical sound of the accent. Try listening to the weather report in the native Irish tongue. Honey for the ears.

From Samuel Becket and James Joyce to Oscar Wilde and Bram Stoker, Ireland can lay claim to some of the literary giants that have influenced and inspired countless writers. The Pulitzer Prize-winning book "Angela's Ashes" written by Frank Mc Court can be experienced by visiting the museum just a stones throw from Birchwater Education in Limerick City along Hartstonge St. In Dublin, the James Joyce statue can be found on North Earl and the Oscar Wilde in Merrion Square park. Why not sit down and enjoy a book with Patrick Kavanagh by the Grand Canal and become inspired.

With some of the best agricultural lands, grazing pastures and rich waters in the world, Irish food will certainly entice the palate. If you're dropping by to study English, then be sure to put aside some time to nibble on the local cuisine and get your taste buds dancing. Although the Irish themselves don't eat fish as much as you would expect, Ireland's selection of shellfish and wonderful smoked Salmon will leave you with a smile on your face and a satisfied tummy. I recommend trying a selection of soda bread, the Guinness stew, black and white pudding, copious amounts of shellfish and anything else you lay your eyes on. For the 100 best places to eat in Ireland, click here.

There's not many who leave the green fields of Ireland without mentioning the friendless of the locals they've met along the way. It may be a cliché but don't take my word for it! Click on the following link to read about two of Irelands cities being voted amongst the top 10 in the world in 2017.

Number 12 on the list is nothing to shake your head at. Besides being an overall friendly nation, Ireland ranks among the safest countries in the world to visit and study in. Click here to read more

Ireland was voted number 6 in the world for standard of living in 2017. With a low population density and natural unspoiled landscapes of mountains, forests, lakes, grasslands, including over eight national parks, one can certainly see the health benefits Ireland has to offer. Tourists flock to the west for the chance to experience the majestic fresh air of the Atlantic. The Irish beaches are among the most pristine in the world and are excellent for walking or jogging if you're feeling motivated. Ireland contains one of only three natural dark spots in the world where you can experience the night sky like the ancient people once did thousands of years ago. Well, if it's not raining that is! Who knows, you may get lucky and have a couple of weeks with clear night skies and pure sunshine beaming down. It's not impossible!

10. The Cute Towns and the winding Roads (with lots and lots of sheep) 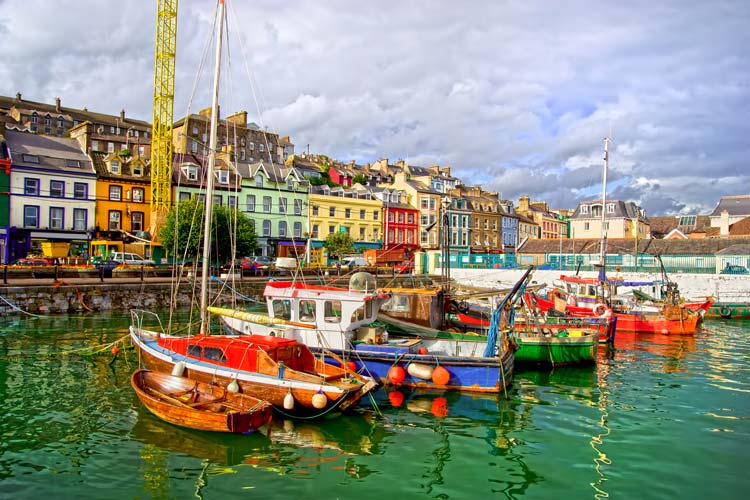 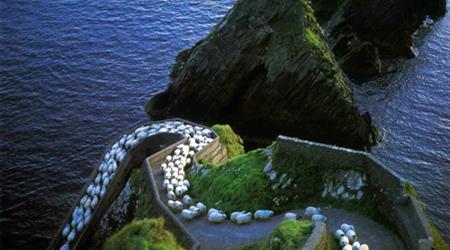 Irish towns are old and full of charm with many still displaying their medieval heritage. The country is dotted with cute towns and winding roads. Ireland's Tidy Towns Competition often brings out spectacular floral arrays, manicured lawns and neat trees on display for all the world to see.

If you're seeking an adventure on your travels then drive off the motorway and take in the winding roads of the Irish countryside that are often lined with sheep, horses and cows. Err on the side of caution however, as some roads are not for the faint hearted. They are often narrow, lined with trees and hedgerows and infused with seasonal colours that span across the amazing views of the sweeping Irish landscape. Be prepared for hills, twists, bends and old bridges as you dive into the unknown!

The Wild Atlantic Way is spoilt with some of most amazing scenic drives in the world. Stretching from Cork to Donegal along the Atlantic Ocean, the tranquil drive is a photographers paradise with every bend worth displaying on a postcard. A quick google search brings up it's recently scooped travel award in China for the ‘Best International Self-Drive Route', and for good reason. The rugged coastline includes the Cliffs of Moher, The Ring of Kerry, Doolin, Connemara, and Killarney to name but a few spectacular landmarks along it's route. Rent a car, turn on the radio and let the journey begin.

Explore and discover the ancient Irish Gods and Goddesses that once roamed the lands of Ireland, now sleeping beneath the numerous ancient monuments and hill forts! Visit the largest Neolithic complex in Europe at the Boyne Valley (Newgrange & Knowth), walk on the old Spiritual Capital where the High Kings of Ireland were inaugurated on the Hill of Tara and experience the old castles and magnificent country mansions. For more check out Ireland's Ancient East.

This will probably come as a surprise to all except those from Donegal. Believe it or not, Donegal was voted the coolest place on the planet by National Geographic in 2017. I'll confess that I was shocked as I've never visited Donegal and I'm Irish! It is definitely on the travel list for 2018. Read more here.

Everyone has heard of Riverdance but it's a relatively new phenomenon that only dates back to 1994 when it was performed as the interval during the Eurovision Song Contest. However, Ireland's history of music and rich heritage and culture dates back thousands of years. Instruments like the flute, tin whistle and bodhran are just a few to mention. Irish music is wide and varied from traditional Irish music, folk music, pop, rock etc. Make sure to visit an Irish pub and take part in a music session or singalong!

Irelands National sports are a sight to behold. The most popular are hurling and Gaelic football. As seen in the picture above, hurling is a sport that allows weapons on the pitch! Those sticks (hurleys) are used to pass the ball (the sliotar) from player to player until the opportunity to shoot arises. 3 points for a goal and one point for putting the sliotar over the goal. It's the fastest field sport in the world and is an extremely exciting sport to watch due to it's speed, ferocity and high scores. We can't take away from Gaelic football which is played with passion throughout the country. It's a mix between soccer, basketball and rugby. Again, it's just one of those sports you need to watch to understand. The finals are held in Croke Park every year and are well worth attending, if you can get a ticket.

The list can't be completed without mentioning the recent star wars movie which had a large portion of the movie shot in Ireland on Skellig Michael Island. The Island was once the home of Christian monks that built their dome shaped homes on this remote Island, some time during the 6th century, to be closer to God. This Unesco World Heritage Site has captured the imaginations of millions in the recent Star Wars movie, The Last Jedi. It's rugged beauty and unique topography have become iconic with visitors to the location exploding in recent times. The Island is situated off the coast of Co. Kerry along the Dingle and Iveragh Peninsula and is part of the Wild Atlantic Way route. Trips to the Island are seasonal and are limited due to conservation restrictions so make sure you book this trip well in advance if you're searching for the Last Jedi.

Join us in Ireland at Birchwater Education and be part of our international group of students studying English. Experience Ireland through our study and work programme and join us on our cultural and social trips throughout the year. For more information, contact us or visit our website www.bwe.ie.

What's on the menu this summer?